Welcome to the 4th part of our first expansion spoiler series. Last time, we looked at the two factions of Shadow Era, exploring their distinguishing features and what new cards you might see for them in the expansion. Now, with that foundation in place, we can start focusing on individual classes, finding out what makes them tick and which direction(s) the forthcoming cards will take them in. With seven classes to choose from, we've arbitrarily chosen to start with Warriors, based on the card numbering for Call of the Crystals - although we're sure they would be the first to volunteer to bravely march into uncharted territory if they could! Let us start our tour by taking a closer look at the heroes leading the charge.

Staring over the hills into the vast armies of their foes, these four heroes lead the way for their armies into battle. Each is a commander deserving the utmost respect and fear in their own way, and none shy away from a battle, or wipe the blood from their hands once it is through.

Since the Last War, a few Gaderi tribes have kept small forces in the borders of Layar, as part of a test for their passage into manhood.  Boris proudly led a sizeable group of these men in raids against unsuspecting caravans and the like for years without any type of incident.  When the Shadow began appearing in his homeland, his raids started against them as well, earning him the powerful weapon they called a ‘Shadow Crystal’.  With it, he gained notoriety and respect, eventually guiding him to be a field-commander against the armies invading Balor. 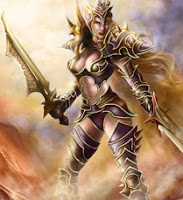 When the Shadow first began its attack on the people of Balor, no village was safe. Everyone within miles of their rapidly growing territory was either taken as a slave or outright killed by the marauding monstrosities.  It wasn’t until they came across the small village of Reeph that a lone housewife took up weapons against them to save the people she could.  Her natural mindset proved an ally in combat; an ally that improved dramatically as she sharpened her skills on foe after foe. 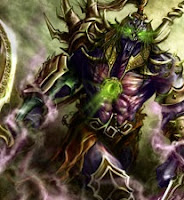 The denizens of Thriss are known for only two things: their brutality and  their destruction of everything they come across.  When they first came into the world of Balor, the fury of their assaults quickly earned them the nickname of ‘Ravagers’, a name they adopted as their actual name once they joined forces with the Shadow.  Few warriors among the ranks of any army epitomise the Ravager’s traits more than Ter Adun. 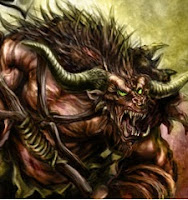 When the first Shadow Gates appeared in Tinnal, the minotaur had no hesitation in moving through to escape their Wulven captors, who had enslaved them for generations.  Their raw physical power made them an undeniable asset to the forming might of the Shadow; a brokered deal granted them freedom and access to Shadow Crystals of their very own.  Logan, leader of the newly formed Minotaur Army, has no qualms with slaughtering any who would pose a threat to his people or their new allies.

Each of these four champions evoke fear wherever they go, but they all do it in their own way. Logan Stonebreaker brings his mighty axe down hard on foes, killing them in a single blow; Boris Skullcrusher sweeps away lesser combatants with his mace; Amber Rain wields her blades swiftly and skillfully, dispatching of enemies as she fights; Ter Adun uses his prowess to dictate the terms of war and leave his opponents unarmed for the fight.


When played to these strengths, two distinct battle styles emerge, each of which is favored by one hero from each faction. Amber Rain and Logan Stonebreaker impact their battles immediately, through their uses of weapons and direct attacks on opposing allies; neither is comfortable dictating the terms of battle by any other means other than the sharp edges of their swords and axes. Boris Skullcrusher and Ter Adun, meanwhile, differ from Amber and Logan by controlling the ebb and flow of battle like the true generals they are, dictating battles through strategy, and out-maneuvering their opponents with their armies. None of these heroes, however, would be anywhere near as feared without the support around them.

First Charge: - (State of the Class in the Core Set)

In Call of the Crystals, each hero discovers their crystal and chooses to embrace its power in different ways to help their cause. With 10 Class exclusive cards at their disposal, as well as 8 different armors and 6 weapons, each hero has a bevy of options to choose from to help decide how they're to dispatch of their enemies. One of the ways that Warriors shine is using their card pool to help enrich their prowess on the battlefield directly. This use has enabled them to become stronger leaders, and rally their armies into ferocious forces. Let's look at a few ways that was demonstrated in the first set:

War Banner is a prime example of the warrior spirit and tenacity. Marching into battle shedding all fear, they strike with fervor and determination, using their powers and numbers to take down their opponents. Crippling Blow is also another example of their might. Reducing the offensive capabilities of a combatant in a single blow, few can really stand tall against the armies that these warriors bring to the fight. 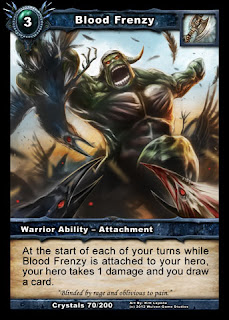 Blood Frenzy provides another way for these mighty generals to lead by example. Being the tip of the spear for their troops, they rally more to their cause, and help you draw more cards from your deck. Being the first into the battle also puts you at the most risk, and these warriors not only lead by example, but they fight with little regard for their own health. 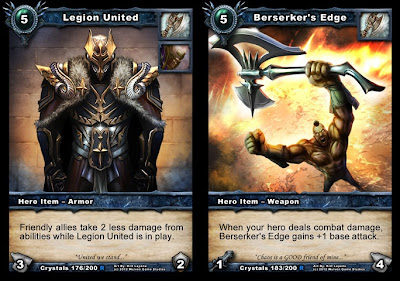 In a final push to gain an advantage over their opponents, all 4 heroes look to heavy armors that help support their comrades against opposing tactics and trickery and high powered weapons that get stronger with every swing. Legion United and Berserker's Edge are prime examples of both. Legion United helps support and unite friendly allies, while Berserker's Edge demonstrates the heroes slugging it out in the fight with their allies, and getting stronger with each swing

Second Wave: - (Upcoming additions to the Class in the Expansion) 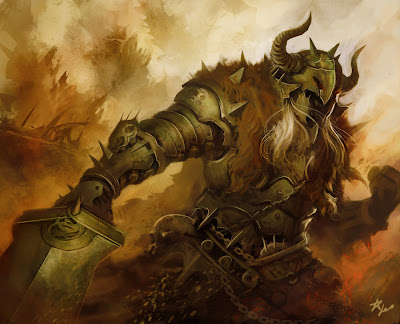 As a continuation of the escalating war, in the upcoming expansion, these heroes reach into their forgeries for stronger, more commanding weapons, more allies join the cause, and new abilities. This amounts to 10 new class cards to assist in the fight, as well as new armors and weapons.


Out of these 10 new class cards, a good number of them are class-exclusive allies that come to the direct aid of these 4 warrior heroes. These allies will be usable by all four heroes, regardless of their faction, and each lends their sword in their own way. This means that decks can use these allies as main focal points, and advantages to be leveraged over opposing classes. They will be their to assist in the early game, as well as in the late game to put away opponents with hammering final blows. New friends have been made, and they are indeed the kind that command attention when entering the field.


Outside of exclusive class allies, more class abilities have been added as well. These abilities both help to strengthen the Warrior class in areas where it faltered, and shore up areas where it shined. As Logan Stonebreaker and Amber Rain are heroes who love to get their hands dirty, several new abilities will help them do just that, and make them enjoy the process all the more. Knowing that both Ter Adun and Boris Skullcrusher are more strategically minded, cards have been added that help rally their armies in the early game and the late.


Lastly, as mentioned before, commanding new weapons and armors are being unleashed. These weapons are not to be trifled with, and let their impact be known immediately. While not always known as weapon experts, both Boris and Ter Adun are swinging for the fences with these new toys, just as Logan and Amber will surely be. The new armors are no different. With these game-changers, crushing their foes has never been so simple, or easy. Donning these new armors, all four heroes have never looked so formidable, or fearsome!


Until next time, this is soothslyr signing out. Stay tuned for our next post in the series, where we will tempt the hunters out of the forest and find out what makes them tick.